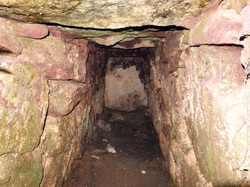 A rectangular tomb with a tunneled stone hut. The mound was built in the early 7th century. There are several kofun (burial mounds) in Kechi and is said that the area used to be the center of the island. 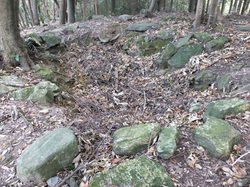 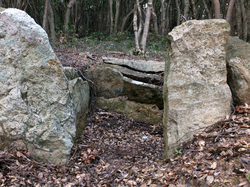 There are five ancient tombs in the area. Three of them are keyhole shaped burial mounds and two are round burial mounds. They were built around the 5th ~ 6th centuries. 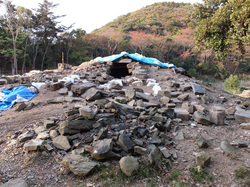 Three burial mounds are located in the area. No.1 and no.2 kofun have a tunneled stone hut. It is said they were built around the late 7th century. 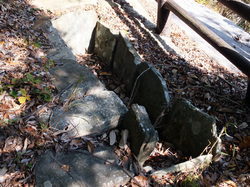 The area used to be a small bay and a box-style stone casket was found on the point of the former cape. The stone casket from the Yayoi period (300 BC - 300 AD) still remain in the area. 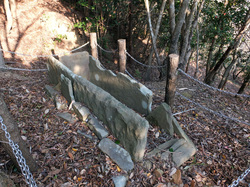 The area used to have a shrine. A stone casket was excavated in 1950. Artifacts such as a mirror, pottery, and glass beads were found. 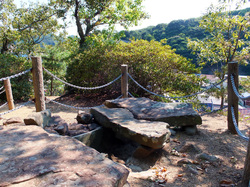 An ancient burial mound consisting of four box-shaped stone coffins. From the inside and outside of these stone coffins, artifacts such as stone accessories, bronze mirrors, and bronze spears were excavated. Because many bronze wares were excavated from box-shaped stone coffins in Tsushima, it is called the "bronze ware kingdom." This burial mound was found in 1971 by an elementary school student. It is designated as a national treasure and draws attention as it illustrates Tsushima's interchange with Korea in ancient times. 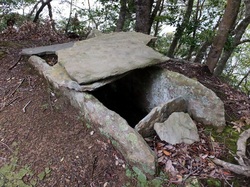 Within the inlet of Hamagusu, a cape juts out eastward where Hekireki (Thunderclap) shrine is quieted. On the mountain behind it, rare artifacts such as Han Dynasty mirrors, iron swords, single-edged swords, axes, hoes, and unglazed pottery were found in several foundations of ancient tombs. Important to scholars, the ruins distinguish a middle period separate from the early and latter periods of ancient culture. 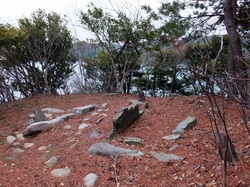 Several stone caskets, built around 5th~7th centuries, were found in this area. Artifacts such as Japanese and Korean potteries were excavated, showing that Tsushima has had cultural exchange with Korea since ancient times. 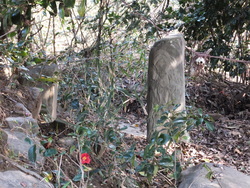 The tomb is said to be built around late 7 century. There is not much left but there is a sign indicating where the tomb is located.
Copyright © 2011-2014 Tsushima Island. All Rights Reserved.
Powered by